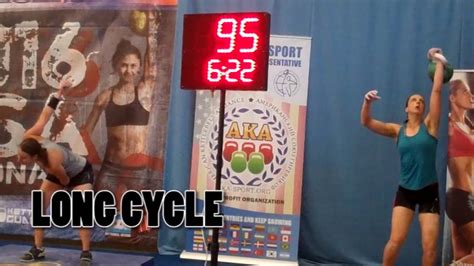 We also had a bit of history and a glimpse into the future of kettle bell sport in the USA. We were honored with a visit from the USA kettle bell Sport pioneer, Lorraine Pattern.

The future of the USA kettle bell sport appeared in the form in solid performances from several youth and junior lifters. Our youth lifters Brianna Bavarian and Gianna Steele both lifted long cycle went a full 10 minutes and Gianna Steele also lifted a 6 kg kettle bell in a ¼ marathon doing 4XX repetitions. 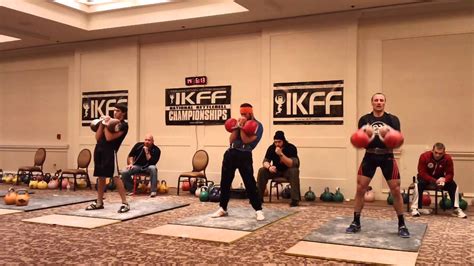 Junior lifter Meghan Hazard lifted a 16kb kettle bell 115 times taking first place and moving closer to her goal of becoming a Team USA member and competing in the UK World Championship in Latvia October 10-15. The first place lifter in each of the professional ranks, 32 kg for me and 24 kg for women atomically qualify.

In the amateur ranks, the top three finalists in each weight category are eligible for the team draft. We hope to see everyone at one of the USA Cup competitions coming up later this year.

The AKA puts on kettle bell sport competitions all over the United States and is responsible for the national event each year, this year in Chicago, which determines who will represent the United States at the International Competition. — jerk of one (women) or two kettle bells (men) from chest level to overhead position (short cycle)

The sequence of events in competition will be determined by host organization. The winner is defined in each weight category by greatest sum of rises (successful reps overhead).

In snatch, the final score is the average of the greatest sum (x) between left and right hand (x/2). Team placing is determined by the results of individual participants based on rules and regulation of hosting organization.

The participant is invited to the platform at least two minutes prior to the beginning of his/her flight. After the “start” command the participant is obliged to begin the exercise: jerk or snatch or long cycle.

The judge declares the signal as soon as all parts of the body of the competitor become motionless. If the competitor conducts a foul or violates any rules of the technical performance, the platform judge can issue a “no count” or “stop set.” 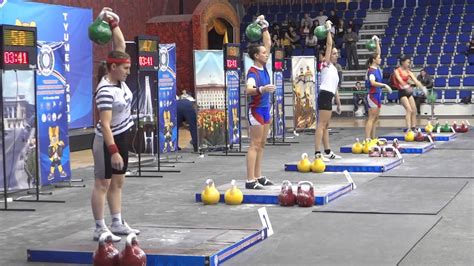 If a competitor cannot completely straighten elbows due to anatomical deviations, or medical condition, he/she should inform the platform judges and/or jury before the beginning of the flight. The JERK is carried out from the following starting position: kettle bells are fixed on the chest, arms are pressed to the trunk, legs are straightened.

Kettle bells are then launched into the overhead position and arms, trunk and legs should be straightened. Legs and kettle bells should be in line and parallel to the plane of the body.

Important note: fixation is punctuated by a dedicated, visible stop of the kettle bells and the athlete. — kettle bells are held in a position lower than the hands (i.e. no cleans or farmer’s carry).

Kettle bells can not be held motionless in a position lower than the hands. LONG CYCLE uses the same rules as JERK, but the “STOP” command is issued when the kettle bell touches the platform.

The performance of the Snatch is carried out in one step from the starting position between the legs. The participant should swing the kettle bell in a continuous movement upward into the overhead position and fixate. 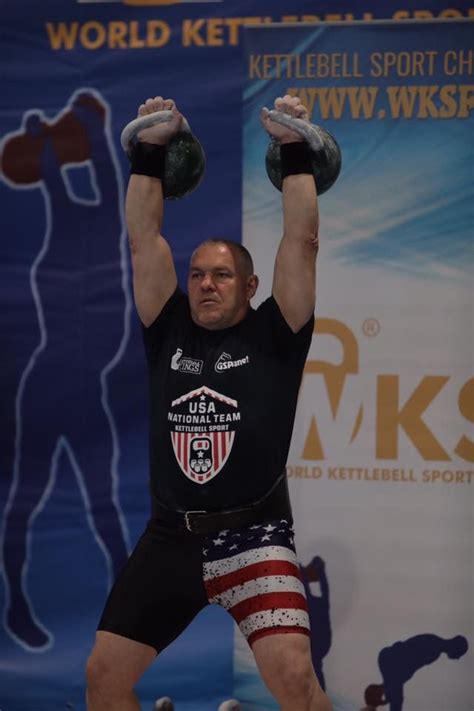 Fixation is achieved when the kettle bell is in the overhead position and arms, legs and trunk are straightened. The legs and kettle bell should be in line and parallel to the plane of the body.

— the kettle bell touches the shoulder or trunk when held by the 2nd hand; The weight of kettle bell (s), exercises, timing, number of legs of the relay are defined in the competition rules and regulations.

5 seconds prior to start the control time is announced in one-second increments: 5, 4, 3, 2, 1 then the command “Start” is given to participants in the first leg;– 15 seconds before the start of the next leg the judge allows the next participant to come forward;– 5 seconds prior to the termination of the leg the control time is announced in one-second increments: 5, 4, 3, 2, 1.– Next, the transfer to the next leg and next competitor is made after the “change” command. The participant who has just finished the leg should place the kettle bell (s) on the platform.– If a participant of the previous leg fixates the kettle bell (s) after the “change” command, the last lift (rep) will not count– the count for the whole team is shared with a cumulative accruing score.

From AKA-Sport.org, a great source for kettle bell sport in the United States