How To Kettlebell Goblet Squat

— The kettlebellgobletsquat is often used to teach good squat technique, as it helps you to keep an upright torso and sit back with your hips. — The goblet squat trains the core and upper back in addition to the lower body.

If you’ve mastered the goblet squat, adding a curl at the bottom of the movement, or doing it on one leg, are good progressions. The kettlebellgobletsquat teaches sound movement mechanics for squatting, allowing you to work your legs without excess stress on your lower back or knees.

It’s a foundational movement for anyone who likes to train with kettle bells, or who ultimately wants to train heavy back squats, front squats, power cleans, or a range of other more advanced movements. We’ll start by showing you how to execute the kettlebellgobletsquat with great form, tell you all the muscles it works and how, and then provide some alternative exercises you can use to become a sound and strong squatter.

Draw your shoulders back and downward (think: “proud chest”), and tuck your elbows in close to the bell—try to get your forearms as vertical as you can. You should feel the arches in your feet rise and your glutes tighten, creating tension in the lower body.

Keeping a long spine from your head to your pelvis, push your hips back and squat down, as if sitting down into a chair. Keep your torso as vertical as possible—you shouldn’t have to lean forward or work extra hard to hold the bell upright.

First and foremost, the goblet squat is an excellent teaching tool for learning the classic squatting movement pattern correctly. They tend to lean forward excessively to maintain balance, and that can lead to a range of problems: squatting too shallow, rounding the lower back, letting the knees collapse inward, allowing the heels to rise off the floor, etc. 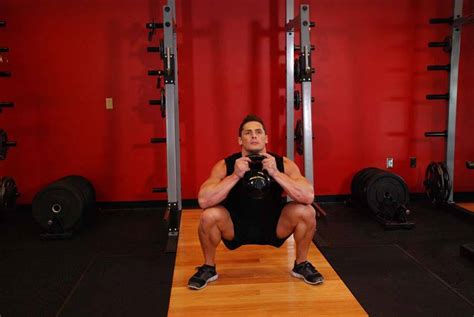 As a result, you’ll feel more comfortable opening your hips and sitting back with them—you don’t feel like you’re going to fall backward when you begin the descent, because the weight of the kettle bell is gently pulling you forward. This allows you to squat deeply with an upright torso, and that makes it possible to activate the greatest amount of muscle throughout your legs, while minimizing shear forces on the spine.

Positioning the kettle bell in front of the torso makes your core brace your spine more or less automatically, so you can argue that the goblet squat builds strong abs as well. Because the goblet squat is relatively easy to master, it works well in circuits and other fast-paced workouts that train the whole body.

Only the most advanced athletes or lifters could be as efficient with back squats and other barbell variations, so it’s no wonder why the goblet squat is popular in exercise classes and for home-gym training. Upper back (traps, rhomboids) Deltoid Lats Wrist flexors and extensors Rectus abdominal, and deep core muscles Spinal erectors Quadriceps Glutes Hamstrings Calves

It will certainly help to improve your squat technique and strengthen your back, legs, and core, but as you progress your loading on the goblet squat, you will reach a point where your upper body can’t support the weight anymore, while your legs still feel strong. However, that isn’t to say that goblet squats can’t be done with heavy weight, especially if kettle bells or dumbbells are all you have to train with.

Some lifters have done reps with well over 100 pounds, which makes for an impressive test of overall body strength. But the difficulty and awkwardness of getting such heavy weight into position makes moving on to a different type of squat a more practical progression. 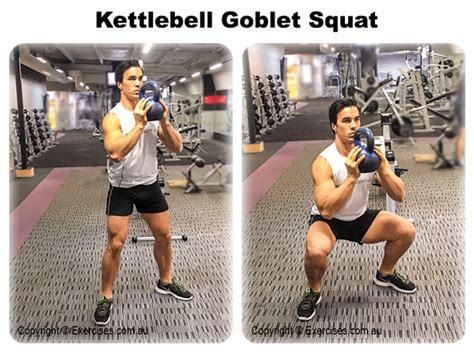 The kettlebellgobletsquat is as beginner-friendly a squat as there is, but it still requires mobility in some key muscle groups to perform correctly. You can loosen up your ankles, hips, and quads beforehand with these drills from Natalie Rigby (Natalie.Rigby on Instagram), co-founder of The Durable Athlete.

Tuck your tailbone under and draw your ribs down, so that your pelvis is level with the floor, and brace your core. Raise one leg in the air in front of you, keeping your knee straight, and pointing your toes up.

Repeat in the opposite direction, engaging your glutes as you lift your leg behind you, and then rotating the foot outward. Keeping a long spine, begin leaning back slowly, so that you feel tension in your quads.

In this variation, you squat down, lower the kettle bell until your arms are straight, and curl it back up. If you can keep your spine and pelvis alignment while you move the kettle bell further in front of your body, you can be sure that your squat pattern is strong and stable.

Once they realize that the goblet squat makes it much easier to squat properly, many people have a tendency to rush their reps, bouncing out of the bottom. Adding the curl forces you to be more intentional with your movement and maintain muscle tension throughout the range of motion.

This can help prevent your knees from bending inward or outward and your tailbone from tucking under too much, and it will lead to better results. Single-leg squatting is a must for athletes, since so many sports movements require you to push off or land on one leg again and again.

The Bulgarian split squat (aka rear-foot elevated split squat) is perhaps the most challenging single-leg movement, and when it’s done holding a kettle bell in the goblet squat position, you combine the core and back training of the goblet squat with the increased range of motion and stability demands of single-leg work. Hold the kettle bell in front of your chest as you would to goblet squat, and rest the top of one foot on the bench behind you.

So it’s OK if your shin is angled forward a bit in the bottom position, and your back matches it. While the goblet squat is ideal for beginners, some people will find that they still have trouble keeping their torso upright while performing it.

With a landmine squat, the load is held in front of the body the same as it is with a goblet squat, but the bar is anchored to the ground and travels on an arc. This all but guarantees that you’ll stay tall while you squat, because if you bend too far forward, the bar will poke you in the chest.

(If you don’t have a landmine, the corner of a room can suffice; just protect the walls with a towel.) Hold the opposite end of the bar with both hands and stand in your squat stance.

Twist your feet into the floor to create tension in the lower body as described in the goblet squat directions above. Unlike the traditional back squat, the goblet squat is executed by keeping the body in an upright position, which results in less strain on the lower lumbar and spine.

Holding the kettle bell in front of your chest to perform a goblet squat is technically isometric loading of the biceps. Whilst they won’t take the full brunt of the load as they are supported by other muscles, it all helps.

As you reach the bottom of your squat, allow your knees to point out before driving up to return to the start position. Now, as you explode up, flip the bell to sit on the back of your wrist at your shoulder and drive it up above your head.

The bell should be dragged halfway diagonally across your chest and then flip to the back of your wrist just before you reach your shoulder. Flip the bell back down and grab with the other hand to goblet squat, before repeating the motion on the other side.

The goblet squat can be used across all fitness levels and sports to develop squat technique, muscle hypertrophy, strength, and better functional movement. GobletSquat Halfway Doorstep 2: Set your feet in a squat stance, so that the heels are at hip width or slightly wider.

(In other words, don’t lean back or push the bell into your chest such that you’re taking the weight off of it.) Your abs and ribs should be pulled down and in with minimal pelvic tilt — keep your spine straight and neutral.

Step 3: To squat, sit the hips down over the heels, making sure to pull your groin down between the thighs. GobletSquat Bottom Front View Step 4: As you descend, be sure to support the weight so that it stays above your chest line.

Any excessive forward lean will result in your hips shooting backwards, throwing off the squat. Too often athletes and coaches will allow the hip to shoot up and back, rather than keeping the torso upright and placing the majority of the movement on the quadriceps.

Burgomaster/Shutterstock The goblet squat is a squat variation that can be done with a dumbbell or kettle bell being held in front of the body at chest height. The goblet squat, like most squat movements, targets the lower body, core, and back. 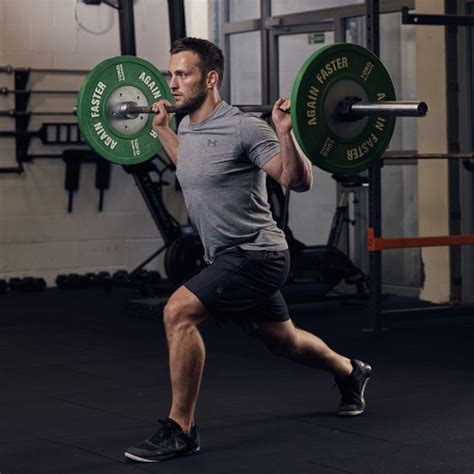 Goblet squats are a good movement for runners and other endurance athletes who need to target the upper back muscles and quadriceps in a higher rep fashion. The goblet squat is fundamental movement for most beginners and is often easier to grasp than a barbell back squat.

Press master/Shutterstock Below are common set and rep schemes to develop movement, hypertrophy, strength, and muscle endurance in the goblet squat. 3-4 sets of 8-10 repetitions with light to moderate loads, at a controlled speed (focusing on proper eccentric/lowering of the weight), resting as needed

The goblet squat can be used to build strength (with heavier kettle bells) by simply using the sets and rep ranges below. 2-4 sets of 12-20 repetitions with light to moderate loads, keeping rest periods under 30-45 seconds 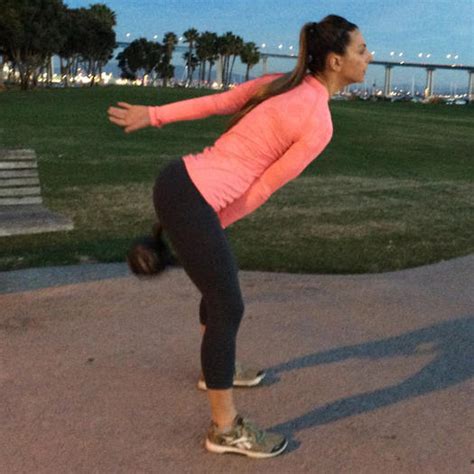 By performing a goblet squat with the kettle bell raised at shoulder height (with straight arms) the lifter can help to counterbalance themselves as the try to find better squat balance and activity. This goblet squat variation can be done to increase a lifter’s stability and control at the bottom of the squat.

By using double kettle bells you can challenge total body control and upper back strength on an ipsilateral basis. The front squat is a viable alternative to the goblet squat, as it targets many of the same muscle groups.

The quadriceps, anterior core, and back muscles are primarily targeted by both be front squat and the goblet squat. The tempo back squat can be done to increase quadriceps engagement to induce greater muscle hypertrophy.